Loch Lomand and The Trossachs

Here is the magic of Loch Lomond and the splendour of the Trossachs, heartland of local hero Rob Roy. Here are Loch Katrine and Loch Achray, the birthplace of Walter Scott's outlaw Rob Roy MacGregor and the town of Callander, famous for its mountains, forests and the Falls of Bracklinn.

The town of Stirling lies at the 'crossroads' of Scotland, on the highest navigable point of the River Forth. It was here in the 12th and 13th centuries that a prehistoric fortress was transformed into the mighty Stirling Castle on a volcanic rock high above the town. It was also in 1543 that the infant Mary Queen of Scots was crowned.

Stirling Castle, built on the remains of an extinct volcano and surrounded by the fertile farmland of the valley of the River Forth.

A vital crossing point over the Forth, Stirling is one of the most important places in Scottish history. In 1297 William 'Braveheart' Wallace defeated the English at Stirling Bridge - a 220ft monument to him stands nearby. The momentous Battle of Bannockburn also took place outside Stirling in 1314.

Not far away are the restored Gothic ruins of Cambuskenneth Priory and the historic Church of Holy Rude which witnessed the coronation of the young James V1.

Despite this wealth of history some visitors simply come to this region to walk, climb, cycle – and fish. There's something here to suit every taste. 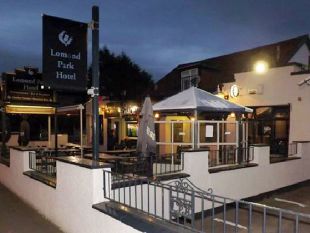