Let us help you plan your ideal vacation in Hampshire...

Tucked away in a picturesque corner of southern England, the mainly rural county of Hampshire is one of the country's oldest regions and boasts a history that is both romantic and epic. Its monumental heritage makes Hampshire a unique focus for tourists hoping to get a sense of old England.

Elsewhere lies the New Forest National Park, a wonderland for nature lovers, and hosts a large portion of the glorious chalk-based South Downs.

Hampshire is mainly built on chalk and has wildlife-rich areas known as the North and South Downs, both of which contain areas of outstanding natural beauty.

The highest point in the county is Pilot Hill at 938ft, or 286 metres, on the North Downs. Butser Hill (886ft, or 270m) is the highest point on the South Downs and lies within the Queen Elizabeth Country Park nature reserve near Petersfield. The county's chalk substrate has turned its key rivers, the Itchen and the Test, into world-famous magnets for coarse and game angling.

Most visitors, however, will be seeking out the county's breathtaking scenery, taking in both forest and heath. Many villages here are quiet, quaint and quintessentially English and among the many enthralling attractions are numerous great houses, country pubs and time-honoured stop-overs.

Nowhere is the 'great outdoors' better represented than by the New Forest, a land of oak and beech. It once provided the timber needed to build the British Empire's world-beating sea-going fleet.

Hampshire's splendid New Forest stretches for a mere 140 square miles, or 18,000 hectares, yet it is internationally significant as one of the largest areas of wildlife-rich heathland in Europe.

One of the major themes in this part of the world is the conservation of animals and birds. Hence, you'll come across signs for Birdworld and Underwater World, the Cholderton Rare Breeds Farm, Marwell Zoo and the Hawk Conservancy.

Equally significant are Hampshire's many gardens located in a county that is replete with flowers, fields and farmland.

The Saxon King Alfred the Great made ancient Winchester his capital and fought a series of battles in an ultimately vain attempt to halt the advance of the Vikings.

More than three centuries earlier another British hero, King Arthur, is reputed to have created his own piece of heaven – also at Winchester – and called it Camelot. The county became one of the first parts of Britain to fall prey to the invading Romans and then the Normans who, in 1079, built Winchester's magnificent cathedral.

North of Basingstoke is Watership Down the landscape that inspired the novel of the same name and written by one of Hampshire's famous writers Richard Adams.

Jane Austin penned her major novels at Chawton and the pioneering naturalist Gilbert White wrote 'The Natural History and Antiquities of Selborne', whilst living at Selborne. His 18th century house has been preserved within a 20-acre park. Part of the house is devoted to a permanent exhibition on Captain Lawrence Oates, co-explorer with Scott of the Antarctic.

At Romsey stands sumptuous Broadlands House, former home of Earl Mountbatten, with grounds that constitute 'Capability' Brown's finest work. Its stable building has hardly altered since the end of the 17th century and now houses a Mountbatten Exhibition.

Elsewhere, visitors will find military museums in the Army town of Aldershot, a Roman town-cum-museum at Silchester (Calleva Atrebatum), and a Romany Folklore Museum near Selborne.

Today southern Hampshire is home to the famous National Motor Museum at Beaulieu, a litany of picturesque villages and some of Britain's most enchanting castles and great houses.

The South Downs were settled in Neolithic times and boast a range of chalk hills which end spectacularly in Sussex at the Seven Sister's cliffs and Beachy Head. They contain hundreds of prehistoric earthworks.

Hampshire's coastline is stuffed with seaside resorts and includes the great maritime cities of Portsmouth and Southampton, two of England's largest and most historic ports.

And that's not all. Just off the shoreline can be found the Isle of Wight and splendid Hayling Island, a focus for both windsurfers and yachtsmen.

The thoroughly modern metropolis of Southampton lies on the edge of the New Forest. A bustling container port, it was ravaged by wartime bombing raids but has managed to preserve ancient buildings together with sections of its old city walls and gateways.

The city is blessed with a natural harbour that boasts an unusual double tide, making it suitable for the largest of ships, including some of the world's luxurious cruise liners.

Sailing in the Solent is only a pastime today, as illustrated by the Southampton Boat Show – the city's biggest annual event.

The city of Portsmouth became a major British port only when Henry VII built the world's first dry dock here. Its Historic Dockyard is still the jewel in its crown and is home to world famous ships such as The Mary Rose, HMS Victory and HMS Warrior 1860. The Mary Rose Henry VIII's flagship sank with all 700 hands in 1545 but was miraculously recovered from the ocean in the 1980s. The Victory was the flagship of Admiral Nelson – he died on board, while HMS Warrior was the world's first iron-hulled battleship.

The Roman castle of Portchester overlooks the city's busy harbour while elsewhere in the region Henry VIII constructed other strongholds – including Hurst, Calshot and Netley castles – to remove the threat of French invasion. 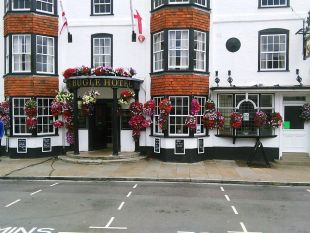 Hotel / Restaurant
BUGLE HOTEL
The Square, Titchfield, Fareham, Hampshire, PO14 4RT
From £60.00 - £119.50 per room, per night (Single Occupancy from £85.00)
2 Single, 5 Double/Twin 1 Family
The Bugle Hotel is located just 8-miles out of Fareham in the charming village of Titchfield, with access to beautiful walks, only a short distance from the historical Titchfield Abbey. Guests are offered a range of tastefully furnished bedroom...
01329 841888
thebuglehotel@hotmail.com
MORE INFORMATION 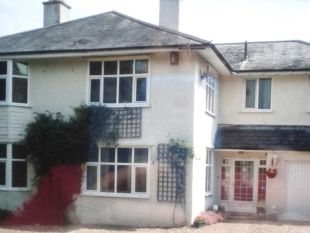 B&B
THE ROWANS BED AND BREAKFAST
76 Southampton Road, Lymington, Hampshire, SO41 9GZ
From £35.00 per person, per night
1 Double, 1 Twin - Both En-Suite
Located only 5 minutes from the High Street and Quay areas with all its well known facilities, Rowans B&B is a period house of a good standard offering a full English breakfast. En-suite bedrooms with baths feature tea/coffee facilities, and TV...
01590 672276
the.rowans@totalise.co.uk
MORE INFORMATION

Museum
MILESTONES LIVING HISTORY MUSEUM
Leisure Park, Churchill Way West, Basingstoke, Hampshire, RG22 6PG
Imagine an open-air museum inside a massive modern building, with a network of streets and buildings based on those found in Hampshire from the Victorian period and the 1930s. Then you have an impression of the size and scale of Milestones - Hamps...
01256 477766
milestones.museum@hampshireculturaltrust.org.uk
MORE INFORMATION 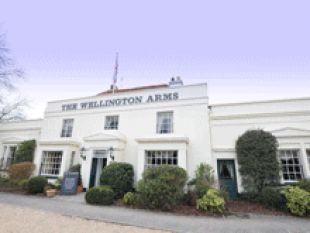 Hotel
THE WELLINGTON ARMS HOTEL
Stratfield Turgis, Nr Basingstoke, Hampshire, RG27 0AS
Right in the heart of the Duke of Wellington's estate and surrounded by the beautiful British countryside; The Wellington Arms is the perfect venue whether you are hosting a meeting, escaping to the countryside for the weekend or even looking for ...
01256 882214
wellingtonarmsreception.basingstoke@hall-woodhouse.co.uk
MORE INFORMATION 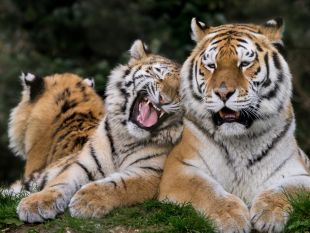 Zoo
MARWELL ZOO
Colden Common, Winchester, Hampshire, SO21 1JH
Get close to the wonders of the natural world and play a big part in helping to save them at Marwell Zoo. From ring-tailed coatis to majestic giraffes, endangered tigers to Egyptian tortoises, curious meerkats to pygmy hippos, our 140-acre zool...
01962 777407
marwell@marwell.org.uk
MORE INFORMATION 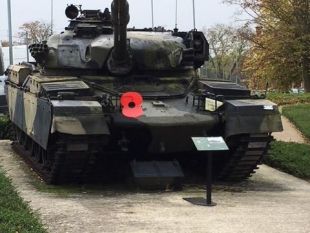 Museum
ALDERSHOT MILITARY MUSEUM
Evelyn Woods Road, Aldershot, Hampshire, GU11 2LG
Housed in the only surviving brick-built barrack blocks left in Aldershot and built in 1894, these bungalow-type buildings once covered the whole of North Camp. Today they tell the story of daily life for both soldier and civilian since 1854, as A...
0845 603 5635
MORE INFORMATION 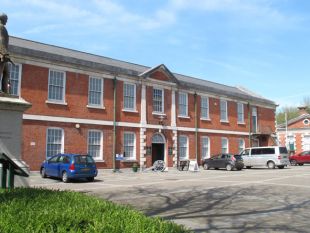 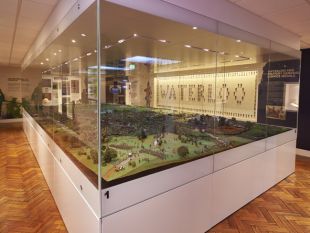 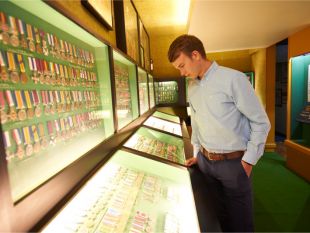 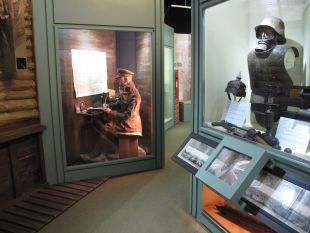 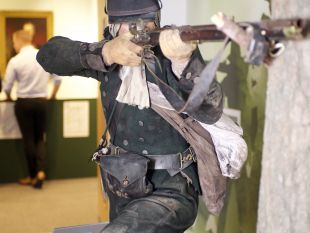 Museum
THE ROYAL GREEN JACKETS MUSEUM
Peninsula Barracks, Romsey Road, Winchester, Hampshire, SO23 8TS
Situated close to the City Centre and the heart of historic Winchester, with its Great Hall and Cathedral, this excellent Museum records, chronologically, graphically and entertainingly, the history of The Royal Green Jackets and its antecedent Re...
01962 828549
curator@rgjmuseum.co.uk
MORE INFORMATION 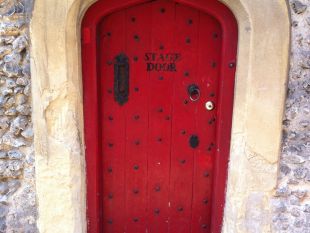 Theatre
THE CHESIL THEATRE
Chesil Street, Winchester, SO23 0HU
The home of the Winchester Dramatic Society. The Chesil Theatre Company is the premier amateur company in the Winchester area having full control of its own premises. We have an active social programme and, through membership of the Little...
01962 867086
chesilinfo@chesiltheatre.org.uk
MORE INFORMATION 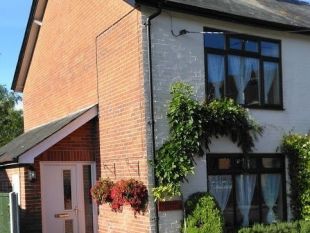 Cottage
RHUBARB COTTAGE
The Custards, Lyndhurst, New Forest, SO43 7AP
From £295.00 - £895.00
1 Unit sleeps 6
Built during the last century Rhubarb Cottage is a dog friendly self catering property in The Custards on the edge of Lyndhurst, close to the New Forest Visitor Centre. Awarded 4 Stars by VisitBritain, Rhubarb Cottage is finished to a high stan...
02380 812753 or 07703 167137
info@escapetothenewforest.co.uk
MORE INFORMATION