Let us help you plan your ideal vacation in Jersey...

A tiny island packed with history, tradition and a spirit of independence, Jersey combines the best of British with a slice of French thrown in for good measure. One of the Channel Islands, it is no more than a dot in the Atlantic Ocean, lying 100 miles from mainland England and just 14 miles from the coast of France. And although its official language is French, Jersey is governed by Britain and boasts its own parliament, the States of Jersey.

The two countries have fought over it for centuries but today, thankfully, it is a vibrant, tourist hot-spot, renowned for its beaches, rugged cliffs, harbour views, castles, short-horned cattle and famous zoo. Covering a mere 45 square miles, or 72 square kilometres, it boasts a lush, fertile landscape that nurtures one of its main economic money-spinners, agriculture.

Made popular by the television series Bergerac, it was playing host to sun-seekers long before the show’s scripts were written. In fact, it has more sunshine than the rest of the British Isles and, thanks to the Gulf Stream, a climate that tends to be milder throughout the year.

Half of Jersey’s population live in the capital, St Helier, whose many attractions include an ancient hermitage, accessible only at low tide, and historic Elizabeth Castle, named in honour of Elizabeth 1 by the island’s then governor, Sir Walter Raleigh.

The city’s Royal Square was the scene in the late 18th century of the Battle of Jersey - and the last time France tried to seize the island. The focal point of St Helier, however, is Liberation Square where a sculpture was erected in 1995 to mark the 50th anniversary of the island being occupied in war-time by the Nazis

As well as offering opportunities for every manner of outdoor pursuit – from walking and riding to cycling to sightseeing – Jersey is noted for its maritime heritage and is a paradise for both yachtsmen and enthusiasts of water-based sports.

Once occupied by the Romans who named it Caesarea, Jersey was created, along with the rest of the Channel Islands, after the Ice Age around 8,000 BC.

Whatever type of accommodation you need in Jersey, you should find it from here. If there is an establishment we have missed or you can recommend, please let us know. 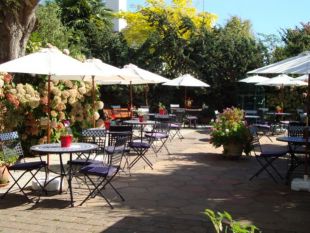 Hotel
OLD BANK HOUSE
Gorey Village, Grouville, Jersey, JE3 9FS
From £50.00 per person, per night
20 Double/Twin - All En-suite
This small but comfortably modernised hotel provides an idea base for an interesting and relaxing holiday in Jersey. It is within easy walking distance of famous Mont Orgueil - Mount Pride - which has played an important role in the Island's histo...
01534 854 285
reception@oldbankhousejersey.com
MORE INFORMATION